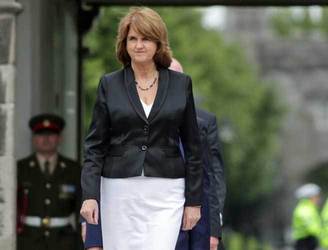 In this interview Táiniste Joan Burton TD she talks about gender diversity and women in leadership and how nice it would be to see more women engaged at leadership levels in politics and in society in general. She talks about the particular challenges women face in politics and in society and says there is nothing wrong with ambition and that we need to hear more womens’ voices at the tables where decisions are made. Her advice to women is not to be afraid of failure, that as her mother used to tell her, in the words of Scarlet O’Hara from Gone With The Wind, “tomorrow is another day!” There is a lesson in resilience!

Joan Burton is currently Táiniste and Minister for Social Protection. This was originally recorded as part of the Leading Women documentary aired on Newstalk 106-108 in August 2014 and funded by the BAI the Broadcasting Authority of Ireland. It was recorded in Spring 2014 and she became leader of the Labour Party in Ireland a few months later.

Give it a listen, she is a terrific role model with lots of advice for women who want to make a difference.