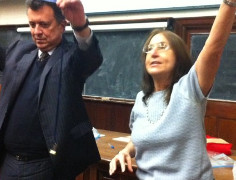 Julietta N.Fierro is an astrophysicist and full time researcher at Mexico’s National University UNAM. In this podcast she talks about her life and her science work in outreach and has plenty of advice for women especially women scientists.

I spoke to her after her talk when she spoke to women scientists last week in Trinity College about her work and she talked about Light Shining On Women in Optics: Tools For Success.

Women are underused as far as science is concerned. When she was a little girl she wanted to run away to the circus and have 12 children but life did not pan out that way.

Her mother died when Julietta was 13. Her father a doctor told her that women’s brains were smaller than men’s and that she should stay at home and mind children and that was when she discovered that she loved school and made up her own mind to charter a different course for herself in science. She also loved Math!  She said women see the world with a different view and have lots of great ideas. Women have a different set of values and approach to science.

She advises women not to be too concerned about housework, to only Care about three things that matter to you. You do not have to prepare perfect meals and having a perfect house. And for women scientists she advises that it does not matter if it takes you longer to do your research because women live longer anyway.