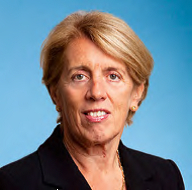 Vivienne Jupp is Chairman of CIE and is also on several other boards including the Irish Hospice Foundation. She has had a terrific career with Accenture and was the first woman director in Accenture in Europe before going on to hold a global role.

Vivienne is never afraid to ask the awkward question whether it is round a board table on a business issue, or of recruiters particularly on issues of diversity and particularly gender diversity. We love her advice not only to younger women about not hiding their light under a bush and grasping opportunities when they arise, but also to mothers and mothers-in-law who she believes can be terrific champions of their daughters and daughters in laws careers.

This interview was originally recorded for the BAI Sound and Vision radio documentary ‘Leading Women’ which was broadcast earlier this year on Newstalk radio.