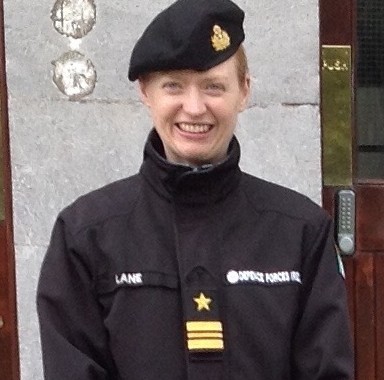 “You have to want a sense of adventure, the Naval Service needs well qualified technical people.” It is obvious just be listening to her that Lieutenant Commander Mary Elizabeth Lane of the Irish Naval Service loves getting up in the morning and going to work. “It is a challenging responsible interesting job you won’t find anywhere else,” she says and as a qualified engineer and a woman in the Defence Forces Mary Lane has had her fair share of responsibility and experience both at sea and onshore where she is based in Haulbowline, Co Cork.

On working  in a job primarily taken up by men she says that it would have been similar to the percentage of men in her university class in engineering in Cork. It is no different to the navy. “It’s nothing that any competent, intelligent woman wouldn’t be able to deal with. I think its just a societal thing,” she says. It is important to think outside the box and look at the job itself she believes. “I don’t see any reason why a someone who wants to do this job,  and is qualified to do this job,  would not be able to get on well and thrive in this environment”.

In the podcast she talks about working on the fisheries patrols, about the emphasis on physical fitness and about the defence forces gender diversity recruitment practices and training. She also talks about the range of jobs and experiences a young woman can expect to do if she joins the Naval Service where ongoing education is a key feature.

Lieutenant Commander Mary Lane also talks about her variety of uniforms and about how proud her late grandmother was of her when she visited her in her Number Ones in her nursing home many years ago just to show her off.

Every single appointment in the Defence Forces is open to either gender, according to Lieutenant Commander Lane and she says that there are no restrictions on the jobs that women can apply for and it is all merit based. On every recruitment team, on every interview board there are females. “They know that by increasing their female membership they will increase their operational capability, they know this.”

Her advice to women in their careers and in life in general is to work at a job that gives you satisfaction and a challenge.

“There is no point in sticking in an area or job that you don’t like for whatever reason. I think it’s one of the best reasons to have a job where you get up and you love coming to work. I think for anyone, where they are not enjoying coming to work in the morning, they have to think about their career and think about changing it. You have to enjoy what you do and have a sense of pride and satisfaction.”