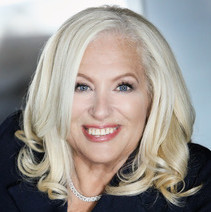 Linda J Smith is on a mission to empower women to use their ‘kick assets’ which they are not doing at the moment she believes. She has just published  her book ‘Smashing Glass and Kicking Ass: Lessons from the Meanest Woman Alive.’

She wears the title of ‘Meanest Woman Alive’ with pride. It was given to her while she was working as a corporate lawyer in the United States of America.

On this podcast she says that “Women have the ability to decode another person’s perceptual screen, how they see the world and this is a huge advantage.  Once you can work out where a person is coming from you can modulate your response to get what you want”. She has used these skills herself successfully over the years. Linda has used the power of Big Law to provide a voice to the voiceless all the way to the US Supreme Court in voting rights cases and in cases defending the rights of immigrant mothers of US citizen children.

She is now taking on the mission of helping women in all fields encouraging them to unleash their power by using their unique advantages—their kick assets—as women, to advance their careers and shine as leaders.

Linda has been a leading lawyer in the US working on billion dollar cases for decades but has taken time out to write her book to give younger women the benefit of her experience. Initially she believed it would be for recent graduates but more and more she sees women getting stuck mid career and unable to progress. She has some great one liners for when you are in a meeting or when you are getting talked over or mansplained or simply being bullied. It worked for her so she may well have some advice you can learn from. 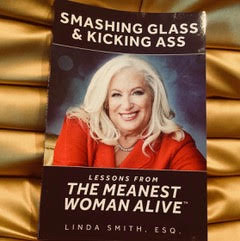 The book ‘Smashing Glass and Kicking Ass: Lessons from the Meanest Woman Alive’ is available on Amazon on Kindle ($3.99), Paperback ($17.99) and a great audible version narrated by Audible Hall of Famer Barbara Rosenbalt.  The link is  http://a.co/7G3GelV.

To advertising on the podcast contact us on info@womeninleadership.ie