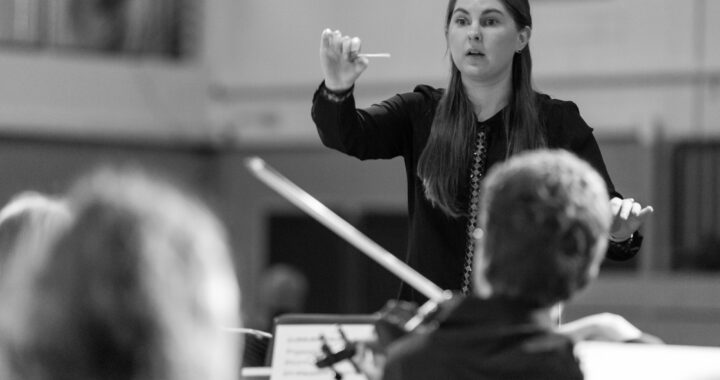 Starting On A High Note

Karen Ní Bhroin in her first podcast shares her story of spreading her wings, taking risks and learning her craft as a conductor. She shares her story so far and talks about taking risks and investing in yourself and always having a backup plan. Recently Karen was appointed Assistant Conductor of Winston Salem Symphony North Carolina in the United States. She has invested substantially in her own musical education on an international stage and took a risk that it would pay off and it has. At 30 years of age she is only beginning her career.

She studied music in Trinity College where she conducted the Trinity Orchestra. Karen Ní Bhroin also conducted the RTE Philharmonic Choir as well as many choirs and bands. She went on to study conducting in the UK and then studied for a Masters in Musical Conducting in Kent State in Ohio on a full scholarship where she worked as an assistant conductor while she was there – a position she won against stiff competition.

The stereotype image of a conductor is a man with dishevelled hair, temperamental and with flailing arms but that is not Karen Ní Bhroin. She is doing it her way with style and technique and wants to considered simply as a conductor – not male or female.

She is grateful however to other women who are and have paved the way for women like her to conduct the great orchestras of the world. Seeing her hero Marin Alsop the American conductor conducting the Last Night at The Proms was an emotional occasion for Karen which surprised her on the night. She does not want to be considered a token female and always questions when she has been awarded a position, if it is a token basis. But she knows her own worth and has a huge work ethic.

The current COVID19 pandemic means that she is working away much of the time on Zoom and international calls but she says others have been incredibly helpful and supportive. “Being a conductor can be quite solitary, so it’s been quite nice to connect with different leaders just to see how they are coping or what their feedback is. People have been a lot more honest about things which I have really appreciated. People have expressed their failures more.”

For herself resilience is the key to success. “If I hadn’t got the 17 ‘Nos’ then I would not have been in America with this one ‘Yes'” she tells the podcast. “If I had got the others, I don’t think I would have been this happy in my career.”

Advice To Other Women

Karen Ní Bhroin says you have to be prepared to invest in yourself. She spent over €30 Thousand on musical education in addition to her degree. This she funded with conducting gospel choirs, bands and teaching and she always had a backup plan.

Looking after your health is very important too she says as it is easy to burn out. “It is up to you to stop yourself and to take that one or two days a week to switch off.” Sometimes with music, days off are not built-in she says and you work over the weekend so you have to make time to switch off and turn off emails.

Karen loves working on works by Brahms but gave the most surprising answer ever on the podcast. To find out have a listen. You will enjoy it and her enthusiasm is a breath of fresh air.