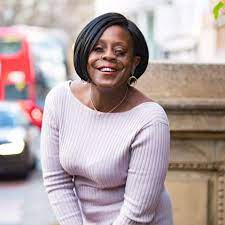 “Our collective history is that Women have been burned at the stake for having opinions, women have been treated like chattels, women have been called second rate, dismissed, scrutinised, silenced. This is a real part of our history and I don’t think when we go onto leadership or strike for leadership we understand the extent to which those histories -I say ‘herstories’ -really show up in our interaction as leaders.” So says Dion Johnson the guest on the latest podcast. Dion has so much wisdom from her own life path. She declares, “I am a black woman in a white man’s world, I am a disfigured woman in a beauty obsessed world and I am a woman of faith in a religion phobic secular world, so I know what it is like not to be taken seriously.”  People do take her seriously now though and she has a book deal and is often called on to speak on various platforms about women and leadership.

This is in the ether this is in the atmosphere and this is what we women are up against when it comes to being seen, being heard and taken seriously as credible high level influencers.

In the podcast she talks about how it is ‘in the ether’ this narrative about women in leadership as she relates the story of how coverage of high level negotiations between Nicola Sturgeon and Theresa May came down to an analysis of legs and how they crossed their legs in the press coverage. What about legsit instead of coverage about Brexit. The headline was written by a woman she says and this was very telling. “This is what we are up against whether we acknowledge it or not. This is in the ether this is in the atmosphere and this is what we are up against when it comes to being seen, being heard and taken seriously as credible high level influencers.”

Dion shares her own story of person growth and rise to level of influencer. “What I did years ago was decided to do when I had this big awakening in my life, was that I was going to  be taken seriously, I was going to show up and learn how to be seen. I was going to be heard and learn how to be taken seriously. I made a decision that   I was going to deal with the inner stuff that was preventing that and face the outer stuff that was affecting that. What I saw was, that as I grew in seriousness about being an influencer and as I decided with conviction that I mattered, that what I had to say mattered, that I had something to offer, the more I grew in that understanding, the more the world began to hear me.  I won a book deal, I am called to speak on different platforms and that’s new. “

“As I do this work to heal my broken self-perception as a black woman, disfigured woman, as a woman who wasn’t welcome in certain circles, called second rate,  as  I embraced my collective history with other women,  as I decided that I am important and what I have to say matters my life is not an accident,  that I am her for a reason, that I have something to offer, as I get with this, so does my world. It allows me to step up.  This is the real work that we all need to be about right now.”

When we try to  win approval of everybody that’s when things stay the same and we turn into parrots. We stop remembering what we think.

1. Go Deeper. Women are involved in personal development but often on a very superficial level. We love tips for this and that, but we need to take one tip and go deeper so we can find the place where you find healing.

2. Meet people before you need them. Advice from an old mentor. Reach out and say I really like what you are doing. Can I buy you a coffee or offer help. Connections always bear fruit in ways that you did not even realise.

3. Me first. A principle I live by. If you don’t like something going on ‘out there’ in the world, you need find it in yourself and deal with it there first. It is uncanny when I hear from my clients the very thing they are pointing to out there, is actually happening in themselves and they need to deal with it themselves first.

4. Support So many of us are suffering in silence. I can’t tell you the number of people who have said I’ve never said that to. Find someone to talk to for real. I don’t believe you have to wear your heart on your sleeve or that everyone needs to know what colour your knickers are. We need to be selective and find the right people who can really offer support. Support is sexy we have to make it popular like the little black dress.

5. Audience of one. I believe there is a higher conscious that watches over our every move. I have to be concerned less with the applause of the masses of the many and more concerned with the applause of my God. I perform I show up I speak I challenge things for an audience of one. This is very challenging. When we try to  win approval of everybody that’s when things stay the same and we turn into parrots. We stop remembering what we think. It’s really a challenge for us all right now, if we are less focussed on being  accepted and being applauded and more about being effective as being the kind of leaders we were born to be.

Money Beliefs Tell Us About Ourselves.

It is not that long since in 1970s women could have their own bank accounts.  Women and money is a huge deal. I help women to grow as influencers and Money always comes up. You can’t be committed wholehearted in speaking up and challenging and going against the grain if you are afraid of money. Often times people don’t speak up because they are petrified of losing their job of not having that salary  and jeopardising their position in the organisation. It is a critical area for us to heal. We spend time looking at our money stories.  Working out what we think about money because often that is as unconscious as thinking about ourselves. We think we are okay. Often our money patterns often belittling and betraying the fact that we struggle with money. Money and power are synonymous. If you have a struggle with your sense of personal power you will have money somewhere in the equation around money and receiving money.

Dion Johnson has three go to pieces of music which we can relate to.

‘Gotta be Stronger’ by Desiree which she dances to around heer kitchen.

Diana Ross ‘I am Coming Out’ which brought her through her own personal growth processing.

and Beyonce’s “I was here” a song that talks about a desire to make a difference in the world before I leave.