Money  is a necessity for daily life in the world we live in. But people can have very rigid ideas about money and wealth according to this week’s guest Seonadh Johnson who has spent her career working in in wealth management. No matter their your income or expenditure people can find it harder to let go of their ideas about money and wealth than their philosophies about politics and religion. In this episode Seonadh Johnson talks about working with entrepreneurs, people with family wealth portfolios and institutions  and about how she has worked with them on their long term wealth management. She was based for many years in London and Paris and is now back in her native Dublin. She believes passionately that people need to talk and plan for their money management no matter who you are or how much money you have and that it is key to women’s independence.

Long term planning and especially plans around inheritance need to be talked about and thought through she believes. This starts when kids are young. “Money is often seen as a taboo word. Some parents feel like they should keep their kids in the dark about what’s coming to them, because they don’t want them to have a sense of entitlement. They want them to stay in school and develop a good work ethic. But I’ve seen families who’ve managed this brilliantly, and who have managed to pass on those values of working hard to their kids, and ensure that they’re savvy enough to deal with their inheritance when it comes to the to that” she says in the podcast.

One of Seonadh’s favourites is the Three Pots Philosophy, “Let’s say for Christmas or your birthday,  you get given some money, you tell them that it actually doesn’t just go all into your piggy bank, or your virtual piggy bank and that there are three of them. One is labeled Spend, one is labeled Save, and one is labeled Share. But then you talk to them about well, what are you saving for, and understanding that you can have this toy now, or you can save up and have this bigger toy in a few months time. And just the concept of compounding over time without necessarily getting into the technicalities of it, but then share,  it can be putting money, into a bake sale at schools. And it can be giving money to a homeless person on the street or buying a present for your granny. It’s just thinking about other people. It’s not all for you and saving, it’s not all for now.”

Seonadh has often seen people of wealth encouraging their older college age kids to work a part time job and to get involved in philanthropy so that they get a sense of perspective when it comes to their inheritance.

Seonadh has often worked with successful women entrepreneurs when it comes to wealth management. “Women tend to think longer term. And, you know, they’ll think when they’re setting up their company already, about their exit strategy, and want to put in place the right structures to plan,  to optimize the return at the time of the exit.  Male founders will do too but I do think that there is  just a lot more foresight when I have conversations with with female clients, and particularly entrepreneurs.”

Seonadh believes every women should think about their pensions from very early on in their career.  “I’ve worked a lot with with female entrepreneurs and executives and whether it’s to do with maybe taking a few years out, or starting work a little bit later, women’s pensions are only 60% of value of men’s,  that’s something that needs to be addressed.” She wonders if everybody  is getting the right amount of information early on in their careers about how to maximize their pensions.

Don’t leave cash sitting in the bank (or under the mattress!)

Investing for long term takes a bit of thinking about Seonadh says. “The temptation is often to leave the excess liquidity in cash because  they think it’s safer. There is also a fear of wealth destruction by taking risk. But actually really understanding and compartmentalizing the different parts going okay, well, if I need this in the next year or two, yes, keep it in cash. But if you don’t need it for five years plus, then really thinking about trying to get a better return than nothing on it is something to explore. It’s not easy and yes, of course there are risks. But I think really firstly, understanding what’s the right amount that you need for your day to day versus what can you put away for the longer term is a good starting point.

2020 was a record year for investments into ESG funds Seonadh says. ESG stands for Environment Social and Governance. Investors are thinking more about companies that are ethical and carbon neutral focussed and who lead with integrity. Climate Change is ringing alarm bells at all levels of business and in all kinds of organisations.

“There were 1.7 trillion invested by the end of last year, and half of all investments into funds were into ESG type funds. Last year, there was a record inflow of 157 billion in the fourth quarter of last year.” So the message about the effect of Climate Change is getting through.

“Ultimately, the profit or loss of a company is going to be intrinsically linked to individual investor’s personal values. And that’s really what it comes down to 76% of  younger generations in the UK want to factor in ESG into their portfolios versus 30% of older generations.”

Seonadh has some terrific Pearls of Wisdom to Share at the end of the podcast and she tells us about a terrific charity she is involved with called “Sailing Into Wellness” where people from all walks of life and challenging backgrounds take to the high seas for a few hours. They come back not only with more than fresh air in their lungs but often a new perspective on life and relationships. “Sailing has been proven to help individuals who are going through therapy programs, giving them a sense of responsibility, a sense of freedom, a sense of perspective, whatever they’re going through. We’ve we’ve had feedback that when they’re out on the boat, they actually feel much freer. They actually feel like they can make a difference. Because right there, and then in certain circumstances, it’s about survival. It’s about going back to your most basic instincts and your most basic needs. More importantly, it’s about being part of a team. And having others rely on you, as well as depending on others and trusting others. Sailing into wellness have worked with mental health organizations and long term addiction recovery centers, as well as kids on the autistic spectrum.” They are also looking at working with people who’ve recently been released from prison so it’s all about inclusivity Seonadh believes. 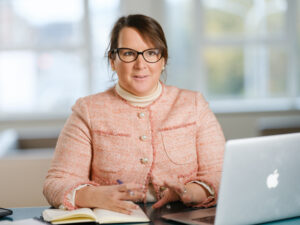